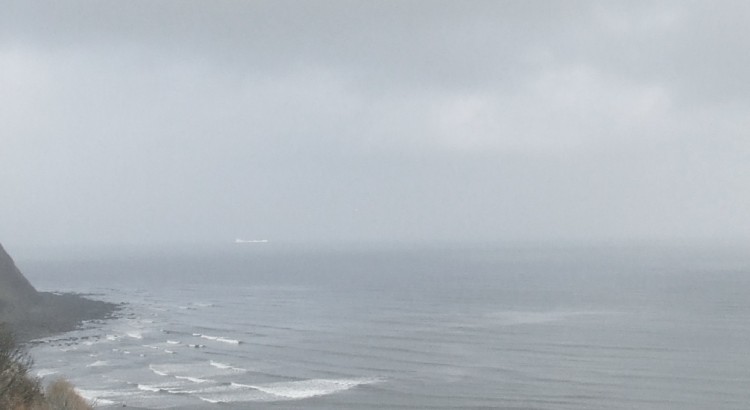 Depths
It had been three days since Joshua had left the port.
He was alone but for the vessel he was steering through the ocean. As he had left the land behind he had seen the blurred outline of cliffs wane slowly in his vision, and heard the cries of gulls and sea birds grow less frequent and excited. On the first day of his journey he had seen new smudges of land to the north and some to the south. He was heading west.
His boat was made of timber; he had waterproofed it with pitch and slotted the timbers together snugly, so that upon absorbing water they swelled and formed an impenetrable shell. He had built the engine himself too – a brass cylinder that heated water and spun as steam jetted out from outlets on either side. The cylinder in turn rotated paddles at the stern of the craft, and he directed the boat using a tiller behind the engine. There was also a sail for when the wind picked up.
Joshua’s steam engine was large, and his vessel was built large to accommodate it. Joshua liked this – he had no one to travel with him, and the size of the craft allowed him the luxury of space. His cabin was at the prow and there was deck space between the cabin and engine where he liked to stand and watch the view. At night, he would lash the tiller and balance the sail against it: a technique, he’d read, for maintaining position.

On the second day of his passage there had been a strong easterly wind. Joshua had risen from his cabin early in the morning, eager with expectation, just as the sun had breached the horizon. The wind was strong enough that he had not required the steam engine, and had conserved his fuel by using only the sail. It was peaceful here. Occasionally a great sea bird would sweep through the sky with a squawk, and small splashes of fish would interrupt the rustling billow of the wind and sails, or the creak of the craft breaking through waves. Time passed swiftly. He had started off running from the rising sun but as the day progressed that radiant sphere had passed over him till he was driving towards its orangey form, glowing on the horizon. It had seemed like it was slowly dipping into the ocean; he almost expected steam to rise as the two elements met, like smoke rises from a battlefield.
Before he retired to his cabin, he set the rudder and sail to lock his position. The wind had died down. He stood on the flat, open deck of his boat as it rocked and creaked, and surveyed the dusk around him. Dry land was visible far away to the south, just a powdering of rock and grass and mud floating on the surface of the sea. He retired to his cabin and shut the door behind him.

On the third day he woke, and listened to the soft sound of waves tonguing the sides of his craft. He surfaced from the cabin.
There was a mist drifting across the water. Joshua could see no sign of land beyond it. The sun had risen firmly in the sky – it must have been mid morning – and it seemed redder than it had been yesterday, staining the mist with its rays. Joshua used his brass compass to point the boat west. There was only a slight wind, so he burned fuel to turn the engine, pushing the little vessel through the waves. As the sun moved across the huge expanse of sky, the mist began to sink back into the water, and a light rain began to drizzle down, feeding the ocean. There was still no sign of land.
During the days Joshua liked to think. He thought about the world, and what it contained, and what it might contain. He thought about the foreign places he had never visited and never would. Most of all he thought about the phenomena of nature. Underground rivers, where it was rumoured that the fish that swam there had no eyes, for there was no light for any eye to see by. He thought about caves in deep jungles, buried under thick green foliage, and wondered about the darkness there that had never known the curious touch of mankind. He thought of the many places that denied the comprehension of man, places alien to him. About creatures nobody would ever discover, in places dripping with stalactites. About volcanoes, like gateways to hell, channels to the centre of the earth filled with bubbling magma. About the earth itself, and the worlds that lay within its body. Bones of incredible monsters, dinosaurs, dragons or nephilim that once breathed the air of the planet.
Night fell on the third day, and Joshua remained on deck. There was no wind. He had turned his steam engine off as the sun began to set. No birds marked the sky. There was no sound but the sea itself. For the sea has a voice, Joshua thought. The sea speaks, when the land is out of mind. It whispers in some ancient tongue, the language of heaven and earth. It’s the sound of everything within its cavernous depths; the tiny fish, swimming through water that squeezes them tight on all sides, the waving, tentacular plants that grow from rock formations that would dwarf the towering pyramids of the east. It’s the sound of huge whales: he has heard that their eerie bellow is like a song to ships that chance to hear it. Perhaps that song is a dirge to those beasts that inhabit the lowest regions of the ocean: ugly, twisted things he had never in his life before considered. Those antediluvian entities live where no light can shine, so they take on all forms: some of those things are just mouths with a throat, all lined in teeth. Why are these things even alive? Joshua wonders. They serve no purpose but to survive for themselves.
Standing on the deck, he is conscious of the space around him. There is no moon but the sky is nonetheless illuminated by starlight bleeding through cloud. The clouds are so far away, but they are the closest the world has to a roof; a boundary. Beyond them… So vast. Even now, looking at the rippled velvet of the sea, small waves highlighted, tips like polished jet, he can see no land, no boundary. The waters could stretch to eternity – to the horizon and beyond, to the seabed and further. He thinks of the thin wood beneath his feet, the only thing separating him from the ocean. He imagines dropping through the deck, breaking calm water, just a head and arms bobbing on the surface. He feels so scared; not of drowning, but of the immeasurable distance to the ocean floor far beneath his flailing feet, and of the creatures, so strange and unfamiliar to him, that live even in the uppermost strata of the sea. He can feel his body course in revulsion at the thought of his fingers brushing the scales of a passing fish, of feeling its slick wrinkled fins or the gasping slits of its gills as he catches it in his thrashing efforts to stay afloat, of his legs bumping the angry head of a soft octopus glaring up through the depths.
Looking down, he can almost see the shadows of huge creatures, monsters of myth, beneath the surface. Not the fairy tale silhouettes of dragons but the shapes of tangible, true, real living things. He has heard of the giant squid that drifts in the ocean, a creature so huge it could swallow a man whole through its blunt beak, weapons rebounding from its hide like sewing pins. The thought of its eye frightens him the most, a rolling ball of thick white matter with no intelligence and no sentience, nothing to appeal to, seeing nothing but tiny, insignificant forms around it, even as its cruel bird’s mouth tears pieces from its prey, the blood lost like rain in the millions of gallons of saltwater.
Joshua thinks of these things and feels an overwhelming sense of relief for his mortality: he cannot travel the wet deserts of the ocean floor, or survive the crushing weight of the sea’s murky body. His boat tilts as something moves against it, something from the depths, something with scales, or a beak, or soft mushy hide.
Joshua leaves turns his back to the sea and inters himself in his cabin. His vessel drifts on, a feather floating on the eternal weight of the ocean. When the sun rises the next morning, the cabin door remains closed.

6 thoughts to “Depths: A Short Story”