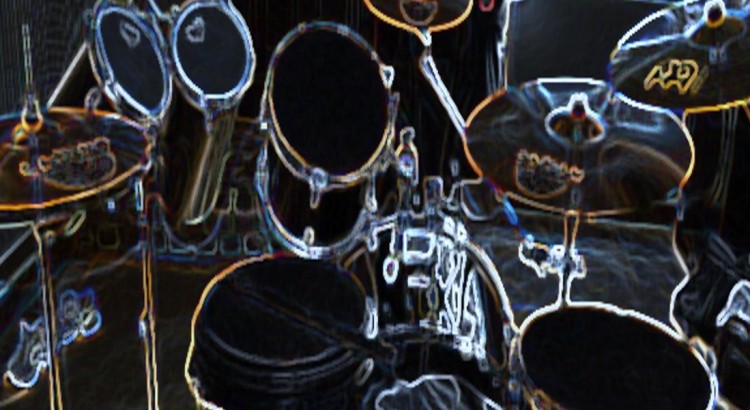 In between writing stories and blog posts I like to drum.  It’s a smashing hobby; cathartic as well as creative.  I started when I was sixteen, but I’ve improved since my first off-beat battering of Smells Like Teen Spirit.  I bought my own drum set, a Mapex Tornado Rock Fusion, back in 2013 after finishing university. But it’s evolved and spread a bit since then, and received a DIY tattoo on the bass drum.  Today I pulled it out of its usual corner and gave the whole thing a polish and spruce up.  Let me show you around the anatomy of a drum kit…

I actually learned the drums on my dad’s Arbiter Flats Lite set.  It’s a great set for a beginner since it’s so much smaller (and quieter) than a full kit, yet still acoustic.  I’ve replicated the setup on my Tornado here.

This is called a ‘two-up, one-down’ setup.  This means there’s two toms racked above the bass drum, and one floor tom off to the side.  Toms, or tom-toms, are the bouncy-sounding drums; the ones that Phil Collins (or that gorilla from the Cadbury’s advert) use for the big fill in In The Air Tonight.  Some drummers use a few as two toms (Ghost’s ghoul drummer had just one!) but fancier drummers can have loads.  The bigger the drum, the deeper the sound. So drumming on them from left to right produces the descending roll that is featured in loads of songs.

The basics, though, are the snare drum and bass drum.  The bass is the big deep one – think Fleetwood Mac’s The Chain, where it keeps a simple steady beat under the guitars and vocals.  You can see I’ve stuffed my bass drum with an old pair of curtains to muffle its sound a bit.  The snare is the one you might clap along to – it’s the military sounding cracking one.  A basic rock beat is produced by alternating the bass and snare. AC/DC do it in pretty much all their songs.

The cymbals here are pretty simple too.  The hi-hats are the cymbals that clamp together using a foot pedal. A basic beat is tapped out on these cymbals to keep time with the bass and snare.  The crash cymbals produce the big crashing sounds that emphasise points in drum patterns.  The ride cymbal can have a beat tapped out on it just like the hi-hats, but because it isn’t muted by another cymbal, it makes a rich ringing sound.

When I played gigs as the drummer for Neuköln, I changed my setup a fair bit.  As a support act, we often used a house drum kit or the kit of the top-billed act.  Drumming etiquette means you can use someone else’s toms, bass drum and cymbal stands, but you should bring your own snare, cymbals and pedals, since these take more wear and are more likely to break.  So I stripped down my kit, to make lugging things from the car to the stage quicker and easier.

This set up is a ‘one-up, one-down’.  This tends to be pretty common with the indie and rock bands you see in local venues, since it doesn’t take up much space.  It also distances you from ‘all the gear, no idea’ reproach, when musicians have impressive or expensive instruments but perhaps haven’t put the practice in that they should…  Anyway, If I didn’t bring my own kit with me to a gig, I would often be playing a one-up, one down setup, and it felt a bit disorientating at first, not having that extra drum to roll on.  But I liked that the removal of the middle tom allowed the ride cymbal to sit lower and closer to me.

Speaking of cymbals, my Neuköln setup has some further changes from my novice layout.  I replaced my ride with a ‘crash/ride’.  This sounds like a ride cymbal when you’re tapping a beat out on it, but you can whack it hard to produce a smashing sound like a crash.  Combining the two meant one less cymbal to carry and to find space for on an unfamiliar kit.  I could also use the bell of the cymbal – the raised bit at the centre – to produce a shorter, more penetrating sound.  The crash/ride proved really flexible in gigs.

Right of the crash/ride is a china cymbal.  These are also known as trash cymbals, and they curve back on themselves a bit, so they have a concave, dish-like appearance.  Chinas are a type of effect cymbal, and have a biting, ‘trashy’ sound that provides a different accent than a crash cymbal when struck.  I find it works best if used sparingly – too much can sound messy and abrasive.

For the odd song, I would attach a tambourine to the hi-hat.  Mounted there, it would jingle when I tapped my left foot, or when I hit it with my stick.  During recording, I also used a ‘jam block’.  This is also known as a plastic cowbell, and it produces a woodblock-like clocking sound.  I didn’t use it live though, since I couldn’t always mount it on the kits I would use.

I’m lucky enough to live in a detached house, which means I can play my drums at home without disturbing neighbours (although I do use mute-pads to tone the volume down a bit).  So this kit is for my own fun – I don’t have to move it, or change out pieces in favour of others.  Let me show you my pride and joy:

I’ve kept the ‘one-up’ layout of my gigging set, but I’ve moved another drum to act as second floor tom.  A ‘one-up, two-down’ setup is common in classic rock, and I like the asymmetry of it.  I am cheating though, because the middle drum isn’t a tom at all, but a snare.  Snare drums have a sash across the bottom skin that rattles against the skin and gives it the cracking sound that differentiates the snare from the toms.  I removed the rattle from this snare so that it produces a dum-dum sound, rather than a tch-tch sound.  I don’t think it would work live, but with the mute-pads on it fits right between the pitches of my rack tom and floor tom, and lets me play the setup I like.  If I find a suitable floor tom, I’ll swap the snare out for the real deal.

There’s no china cymbal in my current setup but I have got a splash.  This makes a smaller sound than crash, and can subtly accent notes in a pattern.  It sounds good placed in the middle of a roll down the toms too.  Speaking of drum rolls, check out the pair of octobans by the hi-hat.  These long, thin drums each have one 6” skin, but have varying depths.  They make a high pitched sound that sounds great before moving onto the toms, or thrown into a funky, syncopated drum beat.  You can see I kept the crash/ride too, but here I just use it as a crash.  The extra weight that makes it ring like a ride makes a heavier, thicker sound than most crash cymbals, and I like it.

Lastly, this setup features a double-kick pedal.  Some drummers, particularly in heavy metal bands, use two bass drums to lay down a volley of heavy hits, or to mirror fast guitar or bass riffs.  Having two bass drums vastly increases the size of a kit, and it can be hard to keep them both in tune and at the same timbre.  A double-kick pedal lets you play on one bass drum with two feet, saving space and ensuring the pedalling of both feet produces the same sound.

I found when I was using my kick-pedals that the left ‘slave pedal’ would slide forwards across the floor, or tangle with my hi-hat pedal.  So I built a board that both hi-hat and kick pedal could fix to.  It doesn’t look like much, and I wouldn’t mind building a cleaner version (maybe with an integrated cowbell pedal…) in the future, but it does a great job of holding the pedals in one place.

Well, I hope you’ve enjoyed this quick tour of my drums, and maybe learned something about how rock drumming works.  There’s a lot more to it than just whacking stuff, and there’s unlimited scope for personalising your own kit and equipment.  It’s a great hobby – good to make some noise between all those quiet writing sessions.

Here’s the specs and sizes of the aforementioned drums and cymbals:.