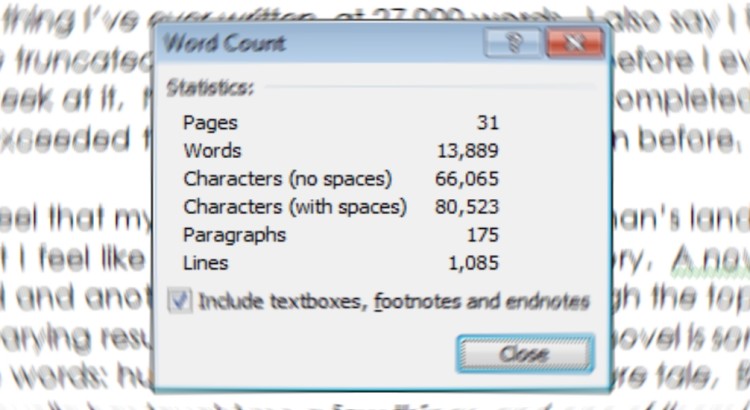 I’ve been a bit quiet on the blogging front for the last couple of weeks, but there’s a good reason. I’ve been working on a short story; a tale that began life as One Night In England back in October of 2014. Today I finished it. I call it a short story but in actual fact it’s the longest thing I’ve ever written, at 27,000 words. I also say I finished it, but I feel the ending is a little truncated and that a redraft is in order before I even let some willing volunteers take a peek at it. Nevertheless, I’m chuffed. I’ve completed a coherent piece of writing that has exceeded the length of anything I’ve written before. Because novel word counts are important.

At 27,000 words, I feel that my story is in embedded in a no-man’s land of categorisation. It’s not a novel, but I feel like it’s a little more than a short story. A novella, then? Where does one class end and another begin?

A quick scan through the top Google results on the subject shows varying results, but it seems for typical adult novels word counts are somewhere between 70,000 and 100,000 words: huge in comparison to my miniature tale. But heartening, in a way – writing my novella has taught me a few things, and one of them is how many words go into describing an event or period of time. The whole story is housed within a twenty four hour day with room to spare; the events of a single afternoon and the following evening in this case adding up to somewhere between a quarter and a third of an adult novel’s length.

Of course, this isn’t a rule of word counts – it just so happens that there was enough going on in my story that it added up to what it does. Some of it may not even make the final cut.

Back to those length-boundaries then. The occasionally reliable Wikipedia cites a couple of views from a couple of establishments: National Novel Writing Month sets a goal of 50,000 words for a novel. The Nebula Award has four prize categories corresponding to various lengths of writing: Best Novel (40,000 words and over), Best Novella (17,500-40,000), Best Novelette (7,500-17,500) and Best Short Story (7,500 words and under). These Nebula categories make sense to me – 40,000 words seems a decent borderline between the novel and its little siblings. A novel of 40,000 may be a small novel, but it’s a chunky piece of writing nonetheless; something that could take a few nights to get through. According to these guidelines, my story would be classed as a novella by the Science Fiction and Fantasy Writers of America. This seems fair. A couple of evening’s worth of reading, perhaps.

What helps me best visualise how many words go into a book is seeing how many words have actually gone into a book. A list of established works and their word counts would really help me get a grip on how much writing has physically composed the books I’ve read and loved. I’ve begun to compile one here, in order of length, rounded to the nearest thousand.

Some examples of novel word counts

I’ll probably add to the list as more occur to me. It’s interesting – The Lion, the Witch and the Wardrobe is epic in terms of theme but has a relatively petite word count. Farenheit 451 feels like a richly written short novel, which is mirrored by its word count. My all-time favourite novel, American Gods, is a weighty volume with a contentedly meandering (but not slow-moving) plot – a similarly weighty count, estimated by its author, reflects this.

Why do word counts matter?

The word count of a story is of course no guarantee of a good read or even of the effort that went into the writing of the thing, but it’s one of the few aspects of a highly subjective craft that can be given a quantifiable value. Writing a book takes longer than reading one, and it can be hard to judge the size of your creation simply by considering the time it took to write it. Taking a look at established classifications of story size and comparing the lengths of other books is the most effective way I’ve found of judging the length of my own work, and assessing what kind of story that makes it.