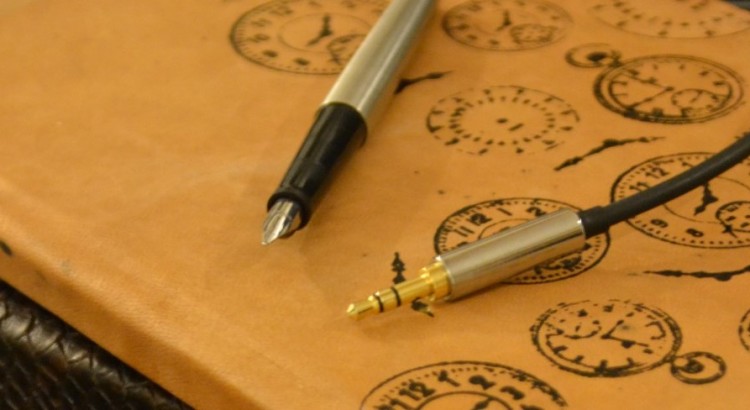 Earlier this week I ambiguously tweeted that I’d written to Ludovico Einaudi. He’s the composer of, among many other beautiful piano pieces, The Waves.  I didn’t mean that I’d written a letter to him, though that’s how it came across. I only meant that I’d listened to his Islands album whilst writing. It’s some of the best writing music I have.

I tend to listen to music whilst working on my books, and was overjoyed to find Stephen King does the same, as he notes in his fascinating On Writing.  Whilst King prefers ‘loud music – hard rock stuff like AC/DC, Guns ‘N’ Roses and Metallica’, I prefer soft stuff – instrumental, electronic, classical…  Music that I wouldn’t usually spin in the car or that I’d learn the drums to.  Background music, I suppose, though I don’t want to mislabel any of the excellent albums below as merely sonic wallpaper.

For the record, I get a lot of my ideas from music.  Depths was inspired by The Maiden Voyage by steampunk collective Vernian Process.  Night Shade borrows from the swampy, voodoo blues of Dr John.  Music is wonderful because it communicates through a medium less explicit than words. That’s why pieces can connect with people in different ways, taking them to different places and allowing them to see what they want when they get there.

Here are some of my favourite albums to plug into whilst I’m writing, whether it’s to create a dramatic mood or simply to block out the chatter of the café I write in during the week.

Vangelis’s score for the film Blade Runner is pretty bleak, matching the film’s futuristic noir setting with synthesised soundscapes and sultry saxophones.  It’s an effective mix and it’s great for writing to – interesting and unobtrusive, save for the occasional sound clips from the film.

I don’t know too much about classical, but it’s great to write to.  The Kronos Quartet are famous for performing the soundtrack to Requiem for a Dream, but this collection is more jagged.  It starts with Black Angels, composer George Crumb’s avant-garde suite that was featured in The Exorcist, and also includes Thomas Tallis’ Spem in Alium, which was for some reason used in Fifty Shades of Grey as Christian Grey’s sexy music.  Dubious usage aside, all the music is dark – as harrowing as anything in metal – and keeps me engaged and creative in a way that more flowery classical can’t.

Trent Reznor is the sole official member of industrial rock act Nine Inch Nails. And he has amassed a fair amount of instrumental music that has made it to my writing playlist.  The best, I’ve found, is his three-hour score to David Fincher’s The Girl with the Dragon Tattoo. It’s a minimalist, purring and occasionally dissonant ambient soundscape introduced by a hard-hitting cover of Led Zeppelin’s most famous Nordic battle anthem.  It sets a discomforting mood which is really easy to write to, as the drones fade into the subconscious and organic instrumental flourishes keep things interesting.

Cradle of Filth normally play a melodic, symphonic style of extreme metal.  I really enjoy listening to them but their music is often a little… exciting… to listen to whilst writing.  Midnight in the Labyrinth is a collection of their early songs re-recorded using only keyboards and strings.  Their serpentine compositions are given new life as orchestral pieces, and the end result is an enjoyably decadent and shamelessly gothic classical experience.

Verdi’s Requiem is the one with the shrieking Dies Irae. You’ll probably recognise it – it has been used all over the place, including Battle Royale and Django Unchained.  The rest of the Requiem is nice and doomy – more so than Mozart’s Requiem, which has a few bouncier moments (these two Requiems were the first classical albums I listened to).  I wrote a good chunk of The Witching Hours to this version conducted by Daniel Barenboim.

Einaudi is great classical because it feels intimate, emotive and epic.  It’s also catchy; accessible to listeners like me, who misuse normal classical as background writing music.  The aforementioned The Waves is probably most famous, but the rest of this greatest-hits style collection is equally good: undulating, relaxing piano music that transports you and encourages your imagination to flow.

I previously lauded Bram Stoker’s Dracula in a blog post a couple of years ago.  Its soundtrack is a significant reason why I like it so much. The swelling overture manages to feel terrifying, monumental and seductive all in one.  It bleeds through the rest of the soundtrack as a leitmotif, and creates a melodramatic atmosphere that is perfect for writing to after dark.  I was really pleased to hear the main vamp used during American Horror Story’s first season too. Proof that it has stood the test of time.

Damnation is the only conventional rock album on this list.  Like Cradle of Filth, Opeth usually play a heavier brand of progressive death metal, but this album removes any trace of growl or crunch, leaving behind a melancholy, thoughtful set of songs devoid of even a distorted guitar chord.  I find it really beautiful and have perhaps over-listened to it – recently I find myself humming along to it rather than writing – but it can’t be beaten for setting a quiet, introspective, rainy-day mood that suits writing down to a tee.

Carmina Burana is perhaps the only straight-up classical set I can listen to on its own and all the way through, as I would a rock album.  After kicking off with the earth-shakingly powerful O Fortuna, it moves through a few different suites that mirror the medieval poems they’re based on.  There are choral bits, solo singers, orchestral instrumentals…  It’s varied and gripping.  The self-explanatory In Taberna segment is pleasingly raucous, but it’s the rest of it that is best to write to, as the music constantly shifts and swells whilst remaining smooth and non-disruptive.  By the time the book-ending rumble of O Fortuna closes the set, it feels as if barely ten minutes have passed, and I’ve always got a good few hundred words to show for it.

The oddly named Bohren and der Club of Gore apparently used to be a doom metal band, not that you’d know it from their published discography.  Now they specialise in dark, dark jazz, the kind of music that Sin City could have been set to, urban, hard-boiled and sexy.  It’s incredibly restrained, as quiet drums brush out a slow rhythm, pianos plink like footsteps and saxophones ooze over the top of black python basslines.

The individual songs blur together – don’t try to differentiate Midnight Black Earth from Crimson Ways or The Art of Coffins, just give into the kind of music you always wanted to exist but never found before.  The nocturnal ambience is superb to write along to since it reaches its black fingers in on a subconscious level, effortlessly setting a scene and allowing you to get on with hammering out your book in haunted peace. This is my best writing music.

This blog post was written to this reading of Carmina Burana. It was also followed by a sequel some years later…