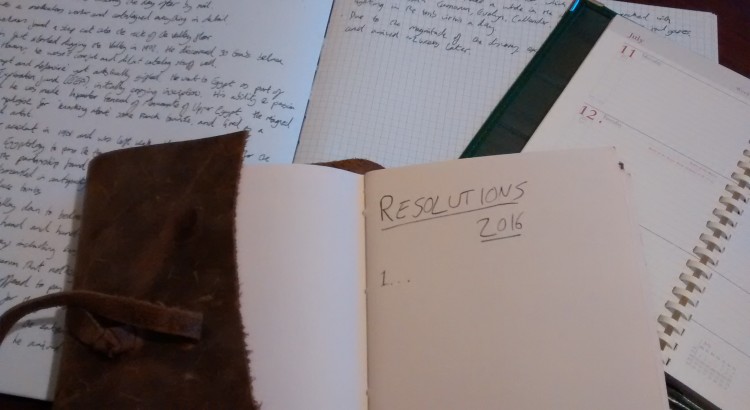 Around this time last year I wrote this post about New Year’s Resolutions, and what I was hoping to achieve throughout 2015.  Without even looking at those resolutions I can already say I’m really happy with the past year and what I’ve accomplished.  I’ve done things that, if not life-changing, are certainly milestones for me in my life.  Let’s take a look at my resolutions of yesteryear…

I don’t think I did too badly with those resolutions; I stuck firmly to two of them and the remaining one mutated and fused to another.  They’ve all been constructive.  I think that giving them some thought and taking the time to write them up as a blog post gave me some motivation to complete them too.  So I’ll be doing it again this year: a trifecta of resolutions to challenge me and give me something to be proud of.

Finish a novel. In my last blog post I discussed the challenges (and rewards, I keep reminding myself) of writing a novel.  I’ve started writing novels before but never completed one.  Yesterday, my current project Rosetta topped out The Witching Hours for word count, making it the longest piece I’ve ever written.  It’s not quite halfway through yet by my reckoning, but I can’t wait to see it through to its completion.  If 2015 was the year of the novella, I’m hoping 2016 will see me write a full-length novel.

Run 366 miles in a year. In 2015 I ran a total of 246 miles – that’s an average of 4.7 miles a week.  5 or 6 miles per run is about standard for me now, so if I continue to improve my running I should be able to up my game and run an average of 7 miles a week.  It’s a lofty goal but I see running as relaxing now – it’s a pleasure to stick an album on and get some fresh air.  So it’s not so much effort to get out and jog when you enjoy it.

Play the guitar regularly. A little vague, I know, but the guitar is a new addition to my life and times.  I bought myself a gorgeous Ibanez GAX30 yesterday since I’ve been borrowing my friend’s Antoria Les Paul equivalent for a few months now.  It’s a much more social instrument than the drums and I’m really enjoying playing around with it.  I know I’ll get the most out of it if I practice it regularly and I’d love to get good enough to jam with friends.

There we have it.  Not too dissimilar to last year’s resolutions but those challenges served me well enough, and I’m looking forward to developing my writing and fitness and well as sticking with a cool new musical instrument.