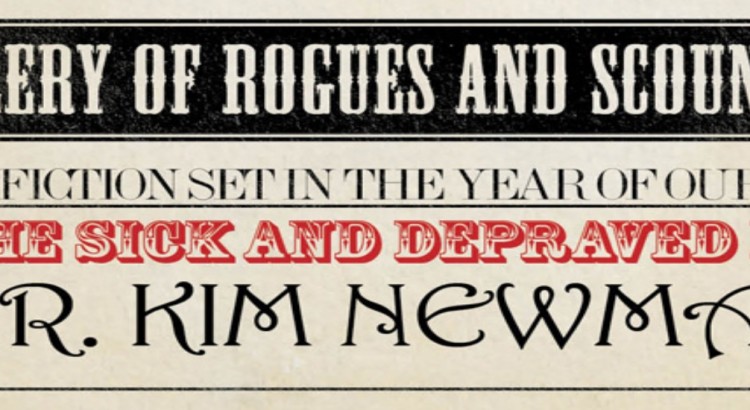 I’m halfway through the literary feast that is Dracula Cha Cha Cha, the third book in Kim Newman’s Anno Dracula series. I’d been intrigued by Anno Dracula ever since I’d spotted it in Waterstones and admired its Victorian cover design, but I actually read it for the first time after borrowing it from my girlfriend a couple of years ago. I loved it from the first page. This is my Anno Dracula review.

Anno Dracula contains one of the best opening sequences I’ve ever read. A Jack the Ripper-style murder in London fog, seen through the eyes of the killer. It hooked me immediately. What follows is in essence an alternate history but also a reinterpretation of that most infamous of vampire novels, Dracula. Count Dracula escapes his hunters, the protagonists of Stoker’s story, and takes Queen Victoria as his bride. Meanwhile, a killer in Whitechapel is hunting down vampire girls and gorily dispatching them.

Newman’s skill as novelist isn’t just down to his writing style. In fact, I get the impression that his rich use of vocabulary and effective employment of descriptions are more a result of his foremost agenda. That is, synthesising different vampire mythologies and references into a new cohesive entity.

Newman is a film journalist and critic, a cinematic aficionado with an encyclopaedic knowledge of horror and vampires. Like director Quentin Tarantino, who delights in paying tribute to the films he loves with sly references or visual quirks, Newman loves to take characters from existing works and include them in his own world.

When his protagonists (Charles and Genevieve – his own creations) need advice from a professor, they meet Doctors Jekyll and Moreau in Jekyll’s laboratory. A clear homage to the work of authors R. L. Stevenson and H. G. Wells, this example illustrates how elegantly Newman integrates these references. He doesn’t jam in characters merely to create a pastiche universe; he simply sees an opportunity to forge a link to another story. Charles and Genevieve could have visited any experts for guidance, so why not name them for two notorious literary doctors? It’s a graceful way of referencing other works and provides a satisfying read for anyone who can pick out winks to more obscure fictions.

I was happy to recognise Lord Ruthven – the undead menace of John Polidori’s The Vampyre – dragged from out the grave (and indeed, my A-levels) and into Anno Dracula as the British prime minister.

I’ve been reading the editions of the series published by Titan, and these include a few bonus chapters. One of these is an analysis by the author of his own work, picking out the references he makes throughout. I find this fascinating. It’s incredible that Newman has created a mythology that complements so many others, whilst remaining wholly his own. Horror and vampires are among my favourite subjects, and I’m in awe of Newman, who weaves in connections not just to the undead but to literature and cinema of every genre.

It is by making these references work in the story’s context that Newman manages to outstrip similar Victorian pastiches. Think Alan Moore’s The League of Extraordinary Gentlemen and Showtime’s Penny Dreadful. Unlike these works, Anno Dracula doesn’t rely on already-established characters for its drama and effect. It uses them to enrich a well-realised and lovingly crafted world.

Newman’s writing style is fairly unique too. Like the infamous George R. R. Martin, his most basic modus operandi is matter-of-fact style of narration. That is, the events of the story themselves are the drama, no matter how they are described. As with Martin’s epics, there’s pleasure to be had in rolling with the story, seeing plot strands progress and widen, combining and wrapping round each other. But while both author’s works always appear to be moving forward, Newman’s novels always seems to be aiming for set destination. This contrasts Martin’s more sprawling style, in which the story seems to get bigger and bigger. (And what else could you want from a high fantasy epic?)

Newman’s books take the form of a sequence of scenes: carefully constructed chapters in a tight story. With his cast of characters covering different locations and factions, the chapters in Anno Dracula rarely follow events directly from one to the next, at least not from the same point of view, and this enables each chapter to be treated as a contained episode of writing in its own right. In this format, a chapter becomes a tight little meta-story. It fulfills its own purpose in the grand design of the novel. As well guiding the novel to its conclusion, the chapters provide canvases for certain effects, atmospheres, or references.

How to write action

It would be misleading to imply Newman writes in a dry, factual manner though. His style is wordy but opulent; the wordiness more a side-effect of Edgar Allan Poe inspiration than an inability to write sharply. At any rate, exposition is frequently broken up with excitement, and when descriptions kick in during more dynamic scenes, Newman displays a great control of words, picking out the richest and most exciting, painting the colours of action and leaving the reader to form tertiary details.

I prefer this style of description to the knottier, layered approach of some other authors. Authors who feel the need to describe exactly what is in their heads for the benefit of their reader. Surely writing will have more of an effect on the reader if it provides just enough flexibility for them to shape it to their own experiences?

The Anno Dracula series is one of the more rewarding series I’ve read. Rewarding because there is something to be unearthed from the novels – they aren’t just good stories, they’re vehicles for Newman’s own attitudes towards the genre he loves and his interests in history. They contain so much to explore: it’s tempting to note down every new name that crops up and historical event that’s mirrored, just to see what fun the author has had in warping things to fit in his own world.

Less an Anno Dracula review than a close look at Kim Newman’s writing, but either way the book is excellent and worth a read. Let me know what you think too!