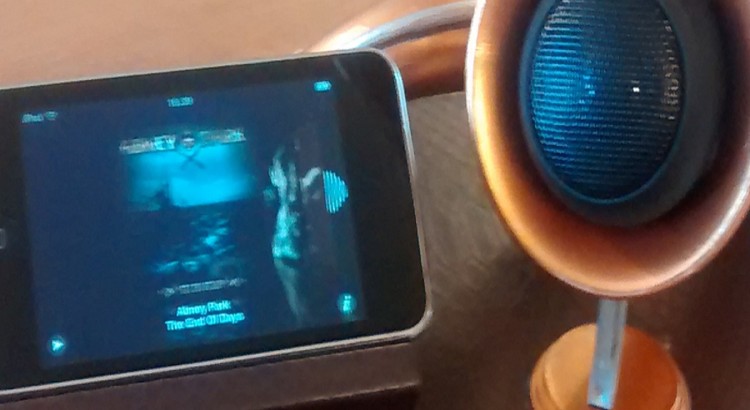 Earlier this year I decided to steampunk-ify my trusty record player.  I’d been considering it for a while – ever since I modded a couple of Nerf Guns back in my university days.  Records are pretty old school; it would only make sense to play them on a Victorianate turntable.  Eventually I bit the bullet and dug out my modelling saw.  Here’s how I built my Steampunk Record Player…

I knew I could achieve a steampunk look simply by dismantling the record player and painting it brassy colours, but I wanted to add something to the player whilst modding it – I wanted to add some functionality.  For example, when I modded my Nerf Maverick, I added power to its firing mechanism and built in a shoulder chain for ease of use.  I decided to add a speaker to my record player, so that I wouldn’t have to keep thieving my girlfriend’s Logitechs whenever I wanted to play an LP.  Once I’d settled on this idea, it didn’t me long to decide to model the speaker on an old gramophone horn.

My record player is an Ion Quick Player Flash, a compact turntable which easily records to MP3 via a plugged in memory stick.

The clear lid detaches from the black base with a little elbow grease and this enabled me to assemble my speaker and accessories separately from the electronic workings of the record player. For the gramophone horn, I cannibalised a toy saxophone, lopping it into three to attain the pieces I needed for an elegant, serpentine horn shape – the bell of the sax forms one end and the mouthpiece the other.  This two-part construction gave the horn flexibility, so I could position it up and out towards its audience.

A few coats of acrylic later and the horn was ready to go.  It was also just large enough to fit a compact speaker within. I went for a Veho360, as it’s got fantastic volume and bass for its size. I just had to chop off the keyring sticking out the side, filing it down smooth.

One of my favourite notebooks is wrapped in snakeskin-effect faux leather, and I wanted the same material for my record player.  I eventually tracked it down on eBay and clad the clear plastic lid with it – after ironing it flat.  The brown leather and brassy paintwork make for a traditional steampunk colour palette.

Whilst browsing The Range for paints and materials, I stumbled across some adorable miniature anglepoise lamps.  Wielding my saw with more enthusiasm than skill, I sliced off the lamp head to get a mechanical-looking prop for the horn.

With the components assembled and painted, I started to connect up the speakers to the turntable.  I used really basic cables – 3.5mm jacks, no bare wires – to tie the electronics together.

I used coiled audio cable for my wires; they look more eccentric than straight ones and this was important since they would be visible to the rear of the record player.  I fed the cable through the saxophone so that the female jack protruded from the wide horn, ready to connect to the speaker, and the male end came out the saxophone’s mouth piece, all set to plug into the player’s headphone socket.

The jack would also be able to plug directly into a ‘docked’ iPod or MP3 player.  The dock is simply a balsa box (also picked up at the Range), clad in faux-leather and thick metallic card.  As the hinged lid lifts, it tilts the screen of the music player towards the user – I added a strip of balsa to the lid to make a lectern-like ledge for the device to sit on.

With all the pieces constructed and wired up, all I had to do was stick the arrangement together.  After a few dry runs trying out different positions, I drew the footprints of the docking box, the speaker leg and a square plaque onto the snakeskin fabric.  I drilled a small hole into the horn into which the anglepoise leg could slip securely and glued this into place.  I used another spare piece of lamp-leg to form a mechanism inside the docking box: twisting a cog on the outside props the leg up, holding the lid at a tilted angle.

Finally, I out some thick metallic cardboard strips to match the contoured sides of the clear lid.  I wrapped these around the record player, forming a bold brass strip that matched the banding on the plaque and docking box.

Well, that’s it: my steampunk record player.  I tried to keep it simple and had a lot of fun one bank holiday weekend getting paint and glue everywhere.  There’s certainly room for improvement – I’d like to add a peg to hold the rear wiring out of the way of a spinning record and I still need an insignia to brand the plaque with.  I’d also like to modify the black base itself, framing the buttons in a brassy control panel and adding a cogs-and-gears pattern to the turntable.  But for now the record player works a treat and it’s great being able to pop an LP on and hear it without needing a trail of wires going everywhere.