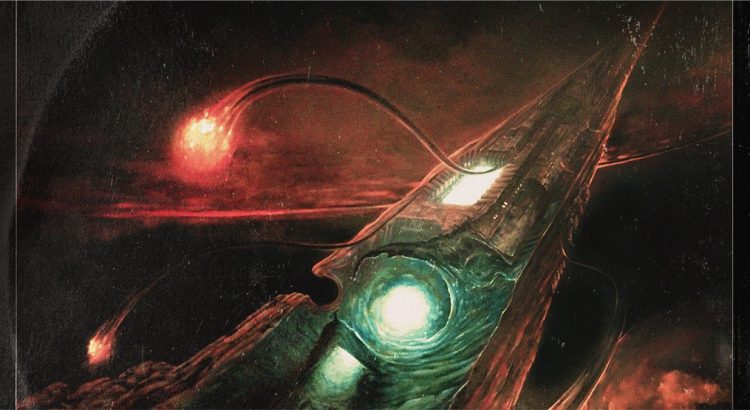 What makes an author qualified to present you with the best albums of 2020? A horror author perhaps; most of the following are culled from horror’s aural equivalents of rock and heavy metal. I write to music a lot but also listen to music to fire my imagination. Also I play drums, which is kind of musical. Depends who you ask.

Firstly, what a record cover. We all know that we definitely should judge a book by its cover, and the sleeve of Hierophant Violent sets a high bar for what’s inside. And what is inside? A mere two tracks, each around the 18 minute mark. Each is the masterpiece in dynamics that post-metal needs to be in order to work; in ebbs and flows, highs and lows. Waves of synths crash and implode and rocky guitars and Nightbridge even contains a short black metal blast section. Let Forlesen take you on a journey.

I tell people I like death metal when they ask what music I like, mostly because it lets them know I like music that they won’t, because of the grunting. But it’s not quite true. Usually I prefer melodic strains of metal; progressive or gothic. Death metal can be a bit ugly for me. All that growling and dissonant riffing. But Pile of Priest’s second album struck a chord with me this year.

The riffs are big and ugly – you’ll be sure you’re listening to real death metal – but they are catchy too, in their own way, capable of burrowing into you head for instant recollection and hummability. The growls are intelligible and occasionally foiled with female vocals (both clean and growled too). There’s melody, there’s technicality and it’s all arranged in a gripping way across a concept album that sucks you in and won’t let go till the final gory second.

Secrets of the Moon – Black House

Speaking of gothic metal: it’s having something of a renaissance. Last year Lacuna Coil finally released a good album (Black Anima), but had their thunder stolen by Idle Hands (now named Unto Others) who mashed post-punk to classic metal to make an inelegant but original beast of a record. Tribulation have been deconstructing gothic metal since 2015’s Children of the Night and finding new ways to combine old-school goth with extreme metal.

Secrets of the Moon join the fun in 2020 with Black House. They used to peddle black metal and heavy distortion remains, edged to the background as echoey guitars take the lead. Veronica’s Room is a nimble and tuneful earworm, like a modern Cult, and when they slow down for songs like Black House and He Is Here the gloomy metal sound comes across almost Alice In Chains-esque. It’s a melodic, riffy and wholly original album.

As well as being a sucker for long songs, I love concept albums and songs about space. Enter Echoes, a one-song-long album about an astronaut exploring a black hole. I threw my money at Wills Dissolve then gave them a listen.

We’re talking heavy heavv metal again, the kind which grunts and growls, but that’s only part of the multiverse of sounds we’ll be hearing on this journey. The atmosphere behind the meaty metal smacks of Pink Floyd and vintage Rush. Since this is one long, thirty minute song, movements don’t start and stop arbitrarily; they transition smoothly (or in places, violently – all part of the plan) and, in doing so, gain a bit of emotional heft – I can’t promise things end well for our hero on his stellar travels. In any case, listening to Echoes all in one chunk is an immersive and cinematic experience.

I’m not much of a vocals man. I like music for its riffs and its drums but mainly for the way different parts of songs are arranged and transitioned, especially over longer songs. I can tolerate most breeds of shrieks and growls over the top of a well-composed song. Imagine then my glee to find a band with superb compositions AND one of the best vocalists in all of metal.

Oceans of Slumber give you a lot of album to unbox and appreciate. Its tracks are long and intricately arranged; you could put Pray for Fire on repeat for an hour, with noise-cancelling headphones, poring over the way acoustic strumming evolves to melodic metal stomping before traversing spoken word and climaxing with blastbeats. And that’s just one song! And what makes it an easy pill to swallow – progressive metal ofttimes requiring effort and investment to enjoy – are Cammie Gilbert’s vocals. She’s just a pleasure to listen to. To the Sea (A Tolling of Bells) is an especial showcase for her soaring voice.

If there are two genres I love but have never heard combined before, they are gothic rock and progressive rock. Louise Patricia Crane has certainly got the credentials for this job: a member of darkwave institution The Eden House (Friday headliners at my first Whitby Goth Weekend), she’s apparently mates with members of King Crimson and Jethro Tull, who make appearances on Deep Blue (yes, there’s plenty of flute).

The result of this genre mash doesn’t quite sound like either style, and that’s to its credit. What we get instead is ethereal and organic, but catchy as hell. Snake Oil is whips up a swampy, flutey gumbo of shimmery guitars and percussion, but Deep Blue sounds like what the grand piano in my séance chamber should be playing (by itself) in the corner. We’re not counting in strict order here, but if Deep Blue isn’t top of the best albums of 2020 it’s probably my most listened-to.

Atmosphere in king in music. At least, to my ears it is. I like songs that take me places – not just through fantasy lyrics, but through mood and ambience. And Kingnomad have quite the destination planned: the universe.

I realised this was my album of the year when I started playing it for the dozenth time and realizing that the lazy pace of Small Beginnings was still gripping me as effectively as it had on its maiden spin. The music here is prog rock, but it hangs onto a trace of the fuzzy, doomy rock touted by bands like Witchcraft and Blood Ceremony. Both are styles that welcomes organs and those keys add depth and texture throughout. The songs stick immediately, yet don’t feel stale after repeated listens. Listen to this on headphones and you can feel yourself entering the music to explore at your leisure.

Near Misses and Honourable Mentions

Wouldn’t have been nice if there had been three more records that had made the cut for my best albums? Then I could have called this the top ten best albums of 2020.

There were albums I listened to and enjoyed this year, even they didn’t connect with me on the level of those above. Frayle released 1692 during lockdown; it’s a mash of doom metal and trip hop (kinda). That trick carries the album – I really enjoy it but would love to see even better songs on their next effort. Paradise Lost summarised their musical career on Obsidian, encompassing doom and gothic metal (what did I say about a goth metal renaissance?); Ghosts would probably make my song of the year shortlist, if I were to make one. And lots of writing this year has been done to Mitochondrial Sun, by Mitochondrial Sun, which sounds like Blade Runner rewritten by an orchestra of synthesizers.

I wonder what I’ll be writing to next year! Merry Christmas everyone.